A peach stone. Udo Gößwald, the director of the Museum Neukölln, points at the small item in a large round case, and a dozen kids from a ‚Willkommensklasse‘ – a welcome class for refugees – press their noses against the thick glass to take a closer look, pushing and shoving one another. ‘Why do you think this is here?’, their teacher, Silvia Hasslauer, asks. The students ponder the history of the curious little exhibit, which looks so unlike what they might have expected from their first visit to a German history museum.

In the early 1990s, when riotous mobs set ablaze refugee shelters in East Germany, Gößwald – the museum’s director since 1985 – collected the peach stone from Zakaria Al Saokal, a Berlin-based refugee. His brother, Fadil, had been imprisoned in Syria because of his membership in a communist party. In prison, Fadil Al Saokal carved a dove – a sign of peace – and flowers into a peach stone. Zakaria fled to Germany to avoid confinement alongside his brother. He took the stone with him. When Gößwald asked for everyday objects around refugee shelters, intended for an exhibition to counter xenophobia in response to violent attacks, Zakaria gave him the stone. Today, over 20 years later, it remains one of the most touching and powerful objects in the permanent exhibition ‘99 x Neukölln’, at the heart of the museum, which is based in the former stables of Schloss Britz. 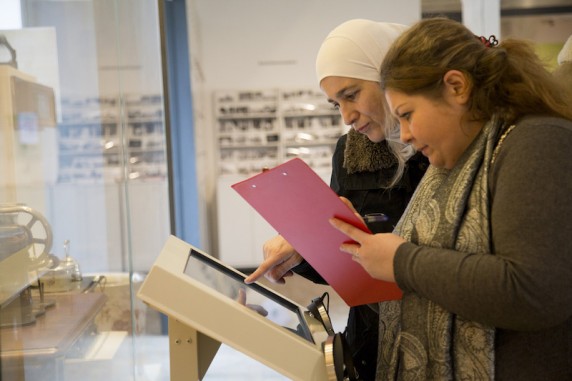 The new initiative allows refugees to learn more about the history of their new home.

On 16th December, Gößwald invited a ‚Willkommensklasse‘ from the Otto-Hahn-Schule to discover Neukölln’s complex history, in which migration and diversity have always played key parts. The pupils were predominantly male refugees from Syria, aged 13 to 17. Over 25,000 underage refugees arrived in Germany this year without their parents, who have been killed, gone missing, or are still in the Middle East, hoping for a possible future in Europe. 54 teenagers share a children’s home in Neukölln, supervised by social workers. In the museum, they tested their German language skills, assisted by bilingual year-9 students with a migration background from the nearby Albert-Einstein-Gymnasium.

Through a learning exercise, the ‚Willkommensklasse‘ pupils had to unravel the history of the peach stone and prepare brief presentations. The tiny object allowed the new arrivals to approach the complex past of Neukölln in a both serious and playful way, which exemplifies the exploratory, undirected, and experimental approach championed by the Museum Neukölln. 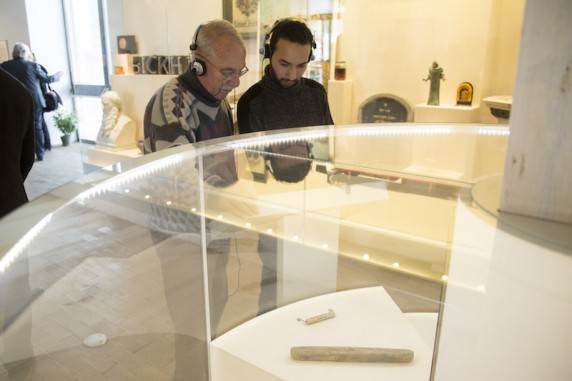 The exhibition showcases a selection of objects that illustrate chapters of Neukölln’s changing history.

Gößwald and his team are taking an active role in shaping newcomers’ experiences and understandings of life in their new city. On 3rd December, Gößwald launched a further initiative in collaboration with the Neukölln Volkshochschule. After 200 German lessons, participants – predominantly refugees entitled to free language courses – spent a few hours in the museum, seeking to answer questions pertaining to the objects of ‘99 x Neukölln’. They had to read historical street signs, muse over obscure gadgets, and decipher inscriptions on old containers. Afterwards, the results of the museum excursion were discussed in the classroom.

Gößwald and Bernd Müller, the director of the Volkshochschule branch in Neukölln, outlined their plans. ‘Living a new life doesn’t just mean shelter, warmth, food, and drink’, Müller elucidated, whilst the students were desperately searching the English translation for Großtrappe. ‘Life is more than that. It’s about participation and belonging in one’s new society. We have a long history of migration here in Germany. Mistakes have been made in the past – now it’s time to avoid them.’

The museum director nodded enthusiastically. Gößwald considers Berlin’s regional museums particularly well equipped to support integration efforts, allowing newcomers to enquire about the society of which they are now a part in imaginative, interactive ways. The Neukölln Museum seeks to add to ordinary classroom teaching by turning museum visits into regular features of Volkshochschule courses and welcome classes. Diversity is a particularly important dimension of the exhibition, highlighting Neukölln’s history as a place of immigration, from Bohemian protestants over East Prussian refugees in 1945 to Turkish and Arabic guest workers. From a historical perspective, the newcomers from Syria, Iraq, or Afghanistan settling in Neukölln are nothing exceptional. This might be a comforting message – both for them and for those who are living here already.