Berlin’s annual Comic Invasion Berlin festival kicked off on April 1 at COLONIA NOVA in Neukölln. An exhibit of last year’s CIB Comic Award winner, drawings from weekly comic workshops CIB and Renate Comics e.V. ran in refugee shelters, and live music filled COLONIA NOVA to kick start the 17 day festival. Nightly Satellite events take place at venues around the city and provide a more personal presentation of the work that will be featured in the two-day exhibition on April 16 and 17.

“The festival started five years ago with just one day, usually a Sunday, with book tables, exhibitions, little kind of comic actions and stuff. And then every year we had more people signing up, and more people asking if they could get involved. And so we said we need something more, like a program that’s ahead of the festival,” said a “kinda busted” Marc Seestaedt, head of the festival and freelance artist.

“Kinda busted my back carrying posters for this event,” he said, sipping his well deserved and much appreciated glass of white wine. Marc is an advocate for raising the status of comics as an art form, especially in Germany. 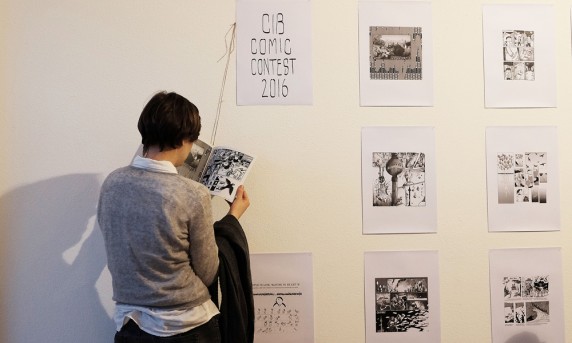 „Comics in Germany have a hard time“

“It’s very different from country to country,” he said. “For example, in France there is a big history of comics and a big appreciation of comics on the same level as all the other art forms whereas in Germany, because of the cultural history, for a long time there was only kind of funny comics that everyone knew. So comics in this country have had a hard time kind of establishing themselves as a serious art form.”

Marc described his experience with the grant process for comic artists, saying comics are completely left out of the form when applying for an arts grant. “There’s music, photography, painting, puppetry for some reason, but no comics. You can either apply for literature or visual art.” As a response to this exclusion, CIB started the Berlin Comic Förderpreis, a small monetary grant funded by CIB as well as professional mentoring, and awards it to one contest winner each year.

“There’s like less than five grants in Germany for comics so it’s a very underfunded medium,” he said. “So ideally, in five years we can find one kind of sponsor who takes care of that prize, finances it and puts something like at least 5,000€ towards it” so it doesn’t come out of the pockets of the festival.

This year, CIB’s overarching theme is on the refugee crisis as they prepare more courses at refugee shelters across the city, with the motto “Drawing as a Voice”. The competition this year touches the theme as well; entries must use the idea “Up and Away – To a Better Place.”